Street Art in St. Petersburg, FL: Coloring Inside the Lines

Years ago murals in the city of St. Pete were just a quiet little dream of spray can artists... All these blank walls and no permission to make art on them.  Through poverty the art was reborn in St. Petersburg, FL.  A block was slated to become condos... this block was one that i enjoyed thrifting and antiquing on when I was a teen... but through a downslide in the economy the block stayed stagnant and empty for years... an eyesore on the main drag of the city--Central Avenue.  The block was finally found again and revitalized.  It was a community effort to clean out and repair the storefronts.  It was deemed to be an artist destination making way for galleries to take root and call the 600 block their home.  I was blessed to have a gallery there for three years.  From the empty storefronts to a slowly building bustle of shops and shoppers the block was dramatically transformed.  Small beginnings were made by TesOne, Pale Horse, Vitale Brothers and Rasta Geary Taylor to bring street art murals to the block.  When Christian Thomas and I painted my Gretchen and Spoonman mural... it was the first mural on that end of the block and my first spray paint mural ever.  The spray paint  was addicting... In one night you can cover a sizable wall with a mural--so fast, so flowing, so many beautiful lines that can be made with a fat cap.  I began to work on the building manager to allow more work to be done... more murals to go up... It was a slow process but over time he began to understand that the murals brought lookers and lookers tend to shop and shopping makes his properties more valuable... It was simple enough math to make a mostly unartucated man appreciate this art.  And street art murals are not always the easiest art to make people love--especially when their idea of good art is a seascape, landscape, photo realism portraits, etc.   But everyone understands money.

The city of St. Pete has several large art institutions with major collections and international draw... from the gorgeous Dali museum to the Chihuly collection to the beautiful Museum of Fine arts,  the Morean Arts Center and Duncan McClellan Hot shop.   St. Petersburg has a lot to be proud of and we have thriving markets and grass root artist conclaves for noise music to fine art painting.

When I operated the eve-N-odd gallery I got to see tourists and locals on a daily basis.  People were thrilled with my tiny gallery and almost everyone bought a little something.  But what people really go ga-ga for is the street art... It's so accessible... it's free... it's for the people... they can pose with it for a selfie.  It's about them and being somewhere at a time and a place.  People connect with street art because it's essentially FOR them.  The 600 block alley has been slowly filled with street art to make it more of a walking outdoor gallery.  And because of this a street art mural tour was created where people pay to go on a tour and hear about the artists and the art they made.

I propose that the City of St. Pete make a mural walking tour from the Central Avenue alley of the 400 block up through the 700 block... All the alley space should be donated to artists who can do a non offensive piece of art.  Non offensive which was perviously defined to me as "city rules" was---no guns, no drugs, no sex/nudity in the work.  But other than that--the artists should be given the opportunity to paint what they want... what is in their heart to paint.  I suggest that city has a fund to pay artists for their materials and money for their time.  There should also be a free for all wall... where people can tag whatever they want there and rehearse their skills.  (of course nothing offensive)  This free wall would attract artists from all over the world to paint...

I would hope that the city would put someone in charge of this who not only has a connection to artists but is not biased by their own desire for power and control.  And building owners should be rewarded for allowing the walls to be painted perhaps a break in property taxes.  And building owners who refuse to participate should pay an art tax--since they refuse to support their art city they can help support the arts in another way.   I wonder if this is how Berlin does things??

I know this whole idea of street art is a can of worms, so to speak... but i feel that the risk will be worth the gain and hopefully will keep everyone coloring inside the lines. 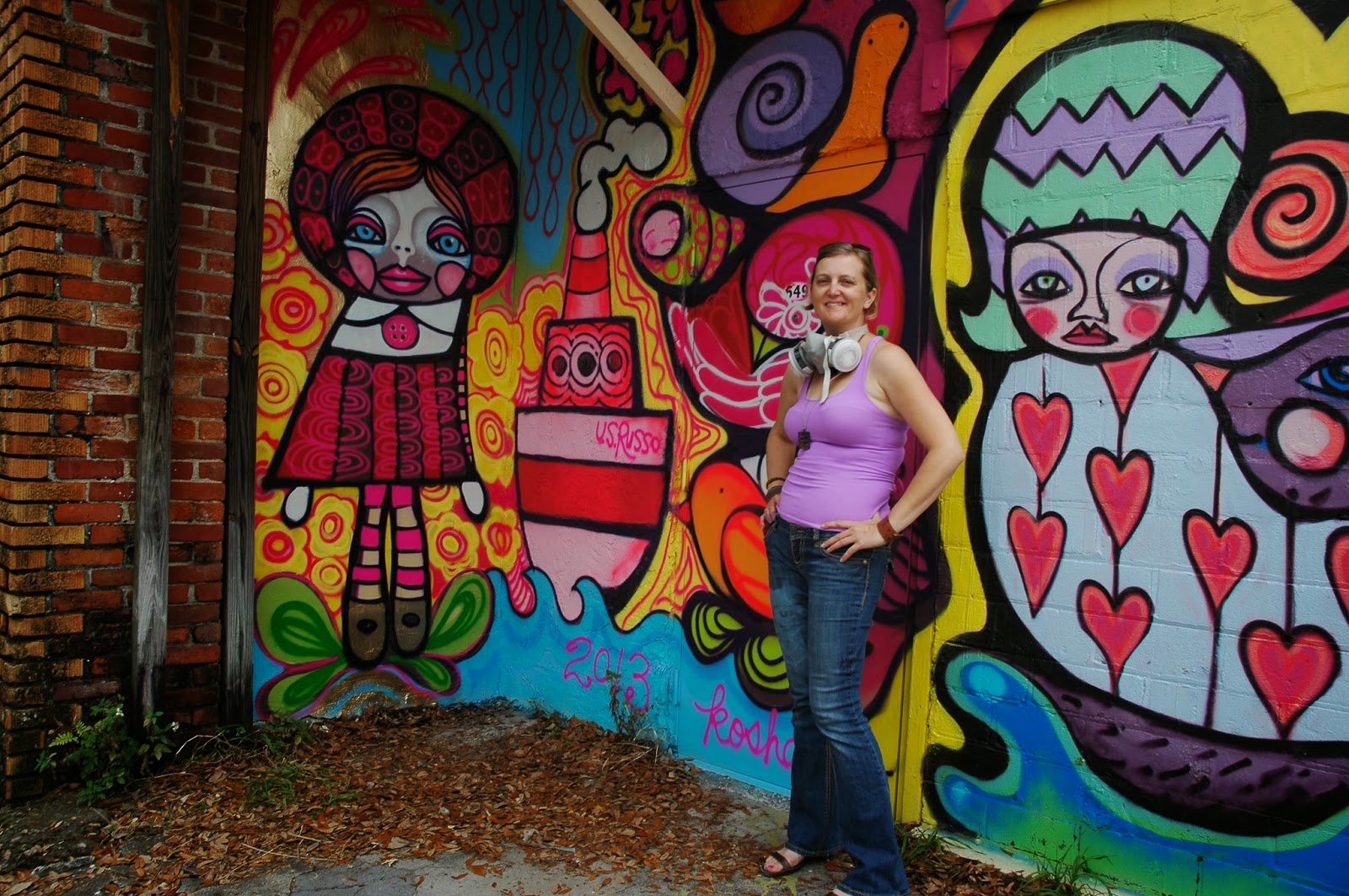 Posted by Jennifer Kosharek at 7:00 AM No comments:

One night only! POP UP, HOP UP... new work by Jennifer Kosharek! 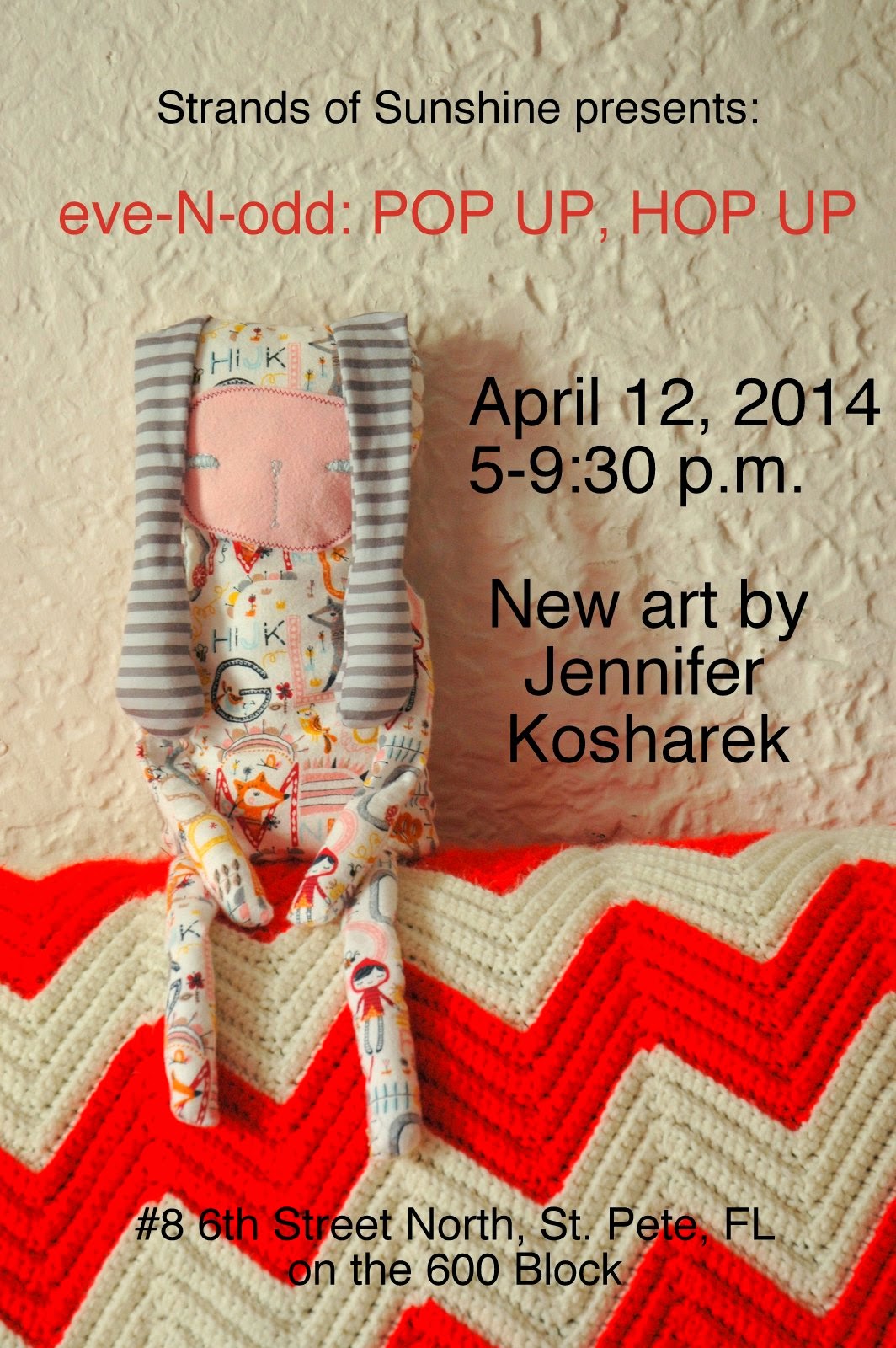 Posted by Jennifer Kosharek at 6:47 AM No comments:

Since closing the gallery... I will now just be working on my own personal art.  Please follow me here:
www.kosharekart.blogspot.com
Items for sale will have a paypal button if they are currently avaliable

Thank you for your kindness for the 3 years that the gallery was open!
Posted by Jennifer Kosharek at 7:18 PM No comments:

Our last show at the eve-N-odd gallery! Bunnies to Bridges: Honoring the Memory of Ray Johnson w 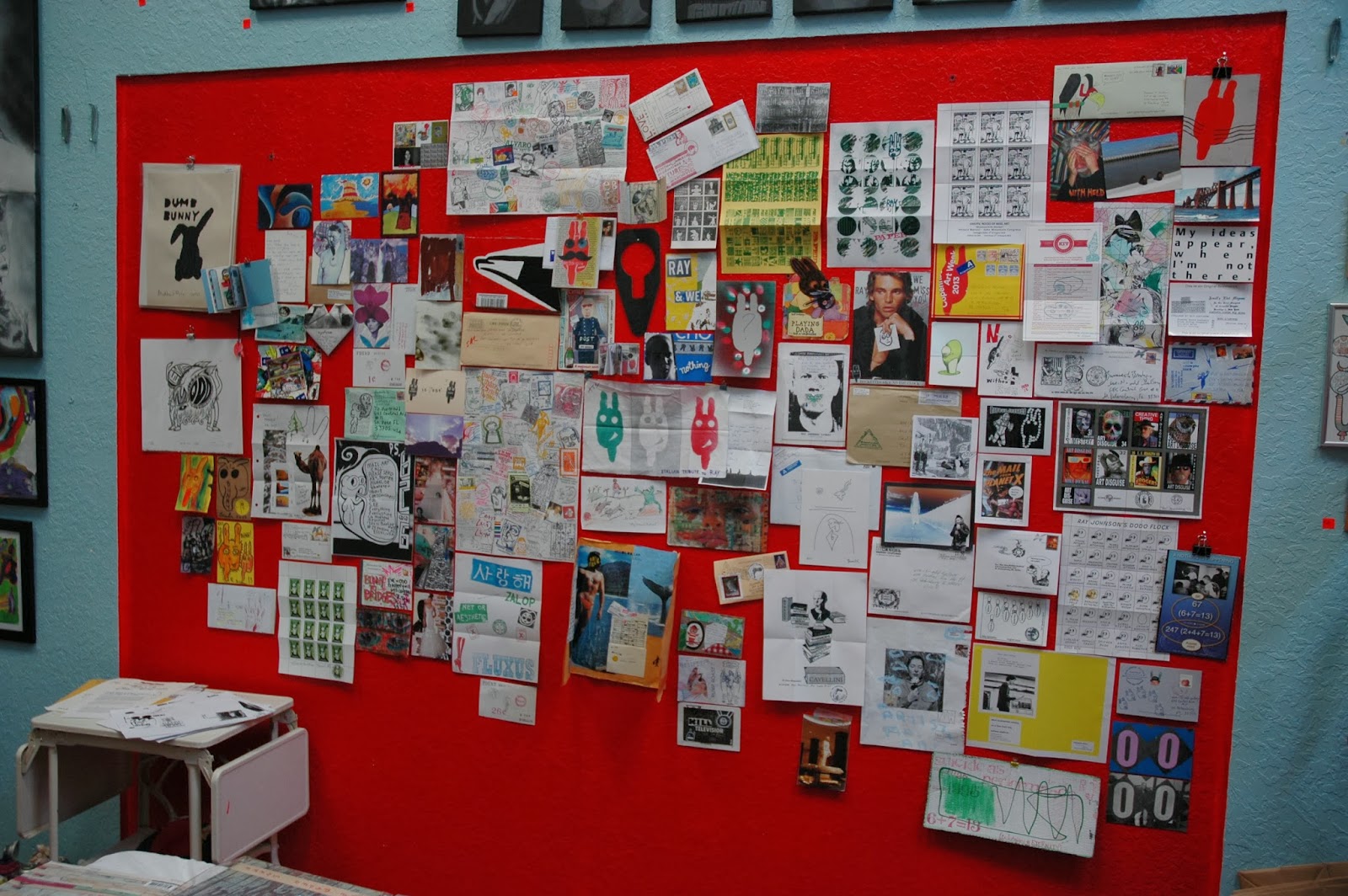 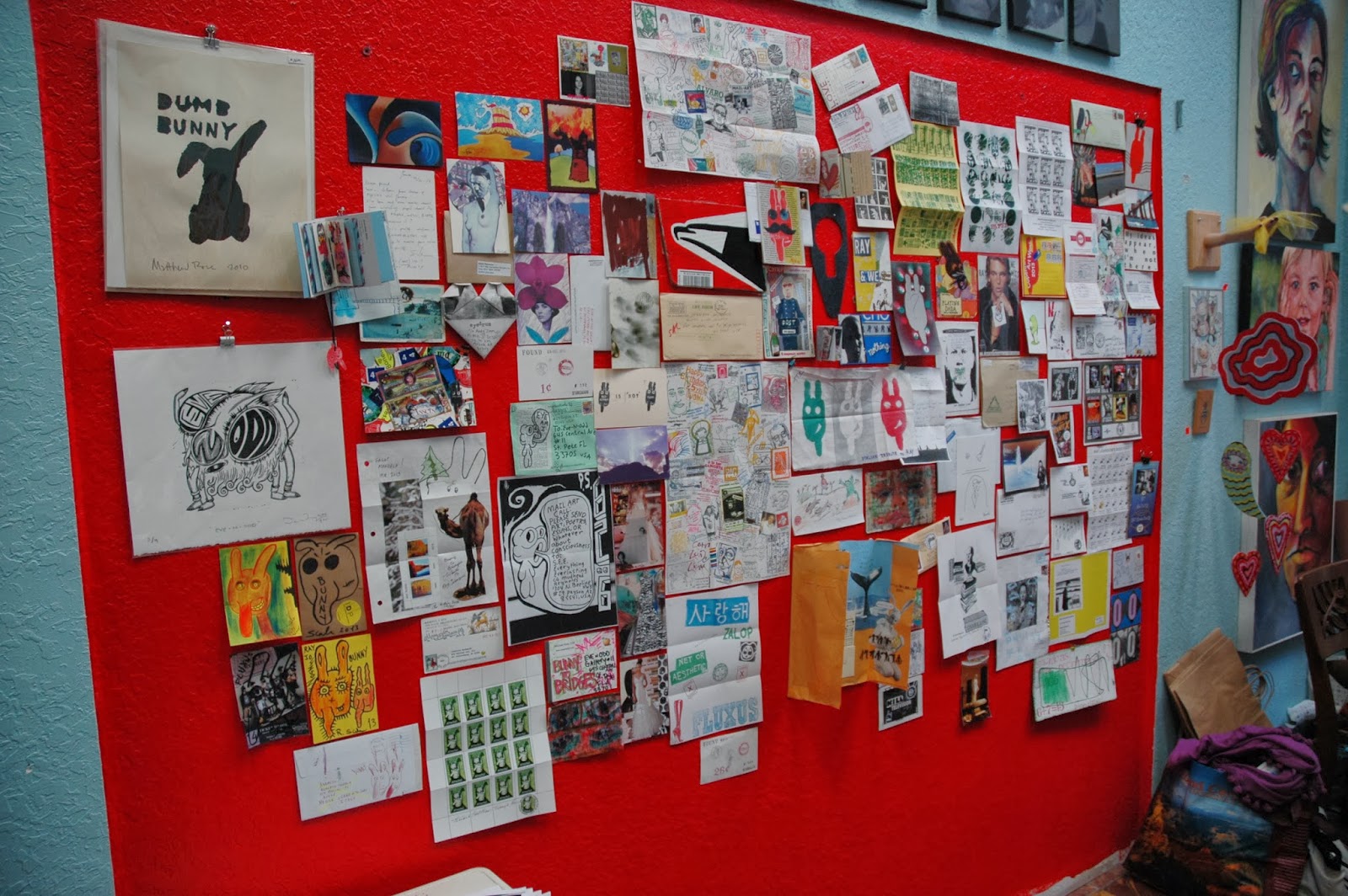 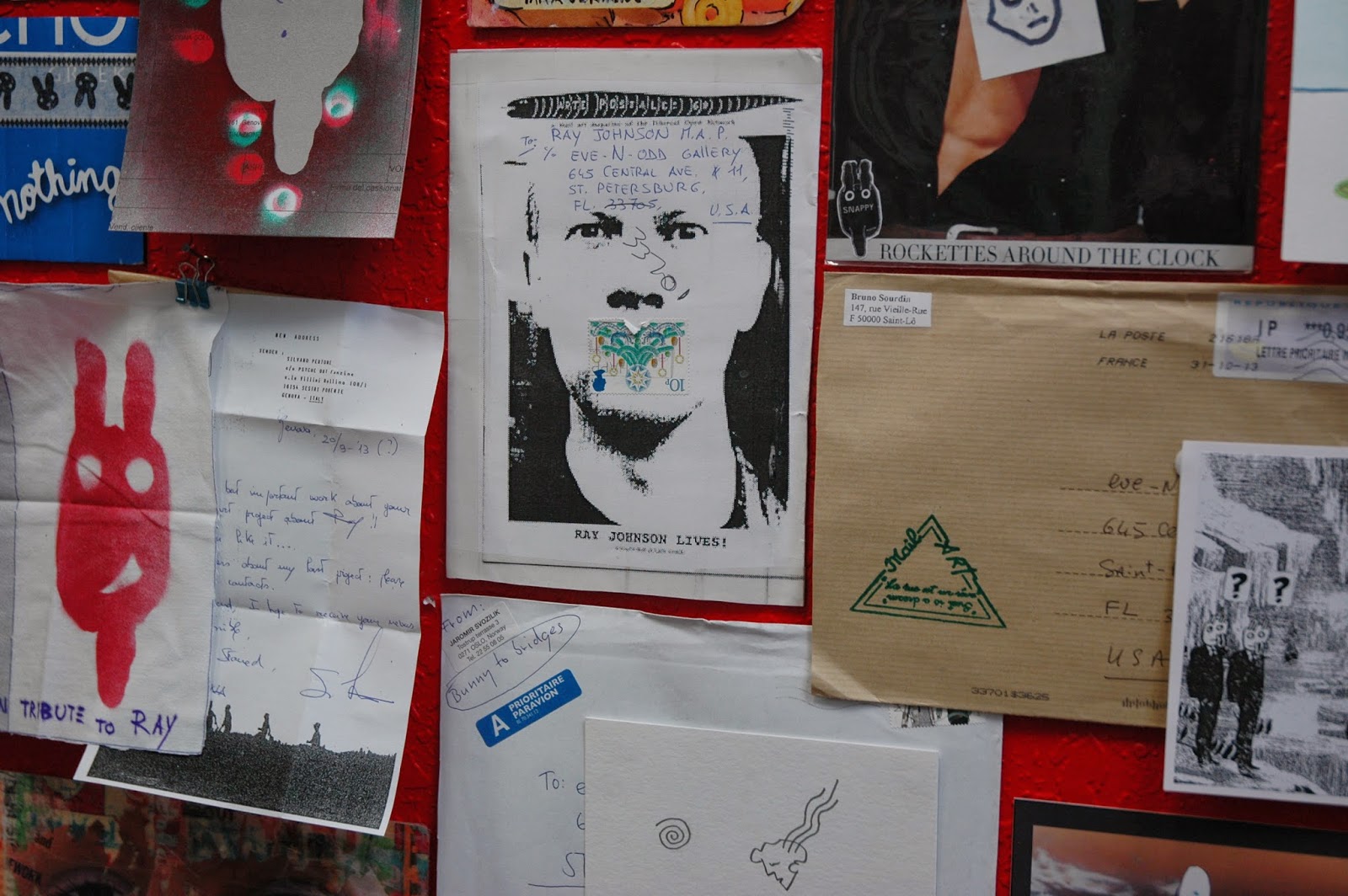 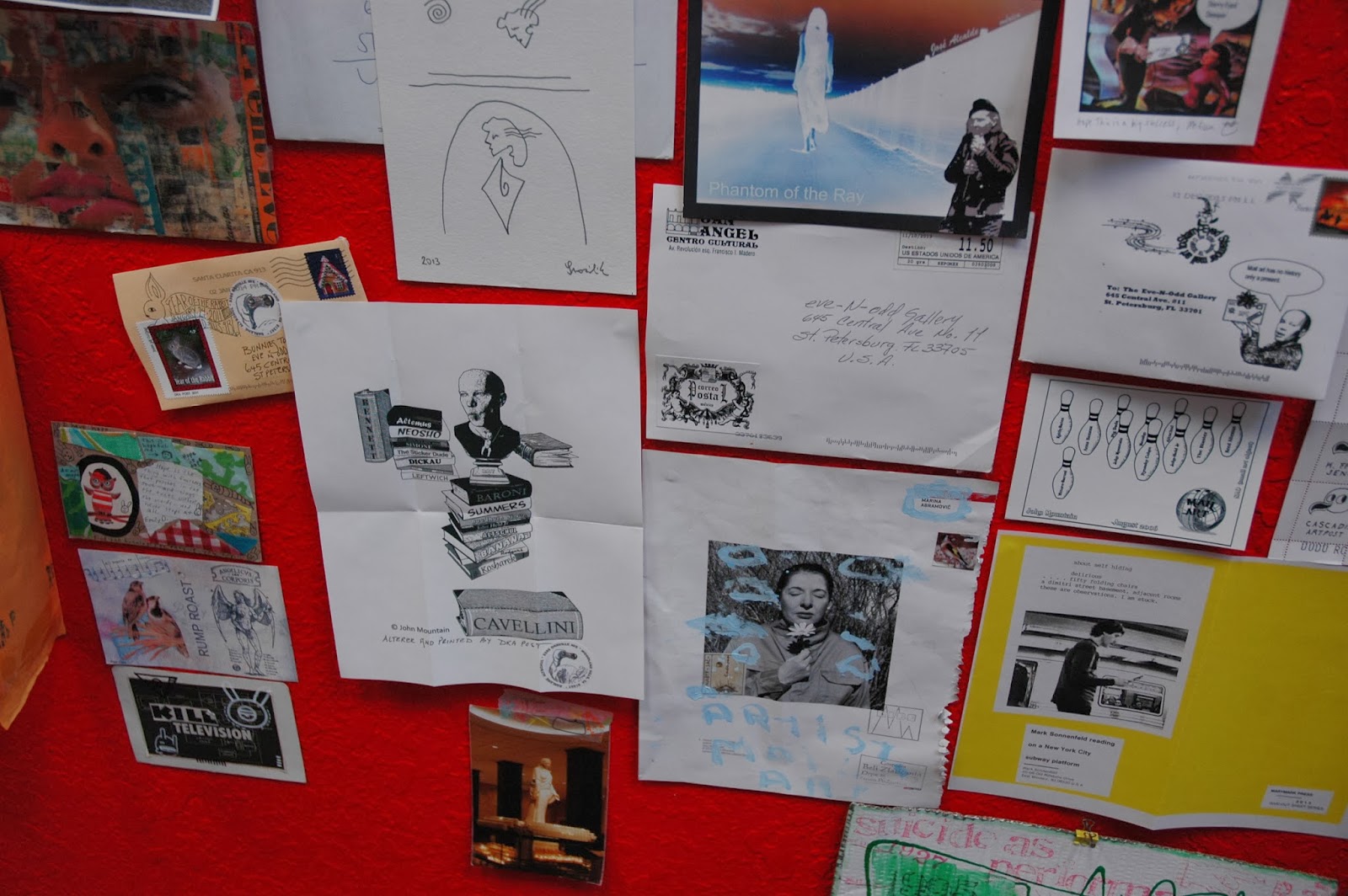 Posted by Jennifer Kosharek at 5:58 PM No comments:

Posted by Jennifer Kosharek at 10:39 AM No comments: 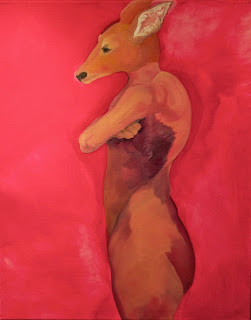 OCTOBER 12th 7-10 pm
eve-N-odd gallery
645 Central Ave. #11
St. Petersburg, FL 33701
evenoddgallery@gmail.com
727. 433. 4981
contact: Jennifer Kosharek
Tara Radosevich was born on March 6,1990 in Saint Petersburg, FL. A local artist, she has participated in group shows around the St. Pete and Tampa area. This will be her first solo exhibition. Her work is primarily paintings and drawings that focus' on animals as the subject matter. She also loves to dabble in other mediums as well such as photography. Currently she attends the University of South Florida and will earn her Bachelor's in Fine Arts this December.
Show Statement
My process is the expulsion of the subconscious in reaction to the external. Deriving from my infatuation with folklore, wildlife, and the supernatural. My internal emotions and reactions to my external experiences manifest themselves into animal imagery. The paintings themselves become allegorical narratives composited of Symbolism, Surrealism, and Realism. The animal is as is; an emotion, a portrait, a memorable experience, or invoke its own symbolic origins unto the viewer. I am in search of this unison between the human and the beast-the importance of what exactly that animal means to us as the human species; in our dreams and our fears.
Posted by Jennifer Kosharek at 9:33 AM No comments:

"There are many charming and slightly quirky galleries in St. Petersburg, and among my favorites is Eve-N-Odd Gallery, 645 Central Ave. It's a slip of a space in the Crislip Arcade in which artist Jennifer Kosharek displays her own work and that of other artists. Right now, see the work of conceptual artist Picasso Gaglione, who was an early member of the mail art movement."
Lennie Bennett
from: http://www.tampabay.com/things-to-do/visualarts/exhibits-debut-during-st-petersburgs-art-walk/2140963
Posted by Jennifer Kosharek at 7:35 AM No comments:

Promote Your Page Too